«Your cage is what you make it
if you decorate it,
it goes by faster,
goes quick laughter»

I’ve been following Deerhunter constantly for three years: ever since I discovered by chance (as it often happens to the YouTubersnauts) Microcastle, a milestone of their repertoire, which then led me to their discography. The reason I literally “fell in love” with the Atlanta band, so deeply I bought all of their records, is in the sense of peace that their music is able to give me. As soon as I listened to Agoraphobia I experienced the same insinuating effect that hit Thora Birch in Ghost World as she listened to Devil got my woman of Skip James: I listened to that song on repeat, over and over again, falling in a whirlwind of monomania. Last Wednesday they opened the music festival Music Is My Radar, inaugurated at the Santeria Social Club in Milan. They presented their latest work and and played some of the most famous pieces, such as Helicopter, Desire Lines or the most recent Take Care.

Their sound has an extraordinary structure, it’s out of time, it’s a delicate melody that knows no cliché, it’s always original, dreamlike but nevertheless it has been surprisingly current for more than a decade. I find that that Deerhunter are pure. They’re “indie” and never dirty, sad but always positive. They come from Atlanta and have been defining themselves as an ambient punk band from the very beginning. Yet their latest album, Why Hasn’t Everything Already Disappeared?, came to life from the sultry heat of the texan Marfa, where it’s been largely registered and produced by Cate Le Bon. In this record the band certainly gives more space to folk and electronic. Cox’s voice (the same asexual Cox who would talk about Jonas Mekas or Robert Altman while drinking coffee, without any of those rockstar taboos) has softened with maturity, while that of Pundt stays cold and protected from mutations of time.

The lyrics of their latest work ask some important anthropological questions (just like the previous album Fading Frontier), it winks at a historical and literary past (the America of the Steinbeck, the booklet’s futuristic design curated by Bradford) up to our days (the murder of Jo Cox, the environmentalist spirit of Element) with the obstinate spirit of those who won’t back down and with Cox’ British elegance, the same elegance with which he holds a sigarette between his fingers as I approach to ask him some questions. I took the chance of their Italian tour date to speak to them and talk about some important themes from their wonderful, latest album. I realized how such sweet notes come from sweet souls. I should have known. To have had the opportunity to meet them was a priceless gift to me. As for now, I enjoy the nostalgia of that moment of joy.

This piece is dedicated to Josh Fauver.

In Why Hasn’t Everything Already Disappeared? I noticed the perfect contrast between the finely decadent lyrics (about death and the end of the world) and the happy sound given by the synth, the moog and the pipe organ. Where does this choice come from?

Bradford: I don’t like when the music and the lyrics are too similar, because I think it’s too predictable and I think the audience wants something that’s more enigmatic or confusing because that way they have to establish their own relationship with it. If something is too simple, if it’s a happy song with happy music or a sad song with sad music it’s just basic emotion, whereas these songs are more complex emotion. The world is ending? but sure I’m happy, fine. Or like: our lives are pointless, but still they are lives, you know? This kind of thing.

In 2007 Jean Baudrillard published an essay titled after your album but in French. Talking about the “liquid” use made of photography nowadays, he wonders whether we’re celebrating reality or its disappearance. What do you think?

Bradford: I think… I did use the title of Baudrillard’s book. I think the title to me was much more beautiful that the essay, but I do like his earlier works much more. I just liked the title: Why hasn’t everything already disappeared  was so interesting to me because he wrote this essay while dying, on his deathbed, so to ask this question while one is dying… I think is very interesting, you know?

What do you like about Futurism? (A note from Bradford)

Are we living in a period of Anti-Fascism’s Fascism?

Bradford: yeah, but I think that real Fascism… we can never forget what real Fascism did to a lot of people and when we call someone like Donald Trump – who I hate so much – fascist I think it’s insulting to the people that died under actual fascists. I think any leader has the capacity to become a fascist and to participate in this kind of violence, but I think that because you don’t agree with someon. To call him a fascist is disrespectful to people who suffered under actual Fascist. Not exactly where we’re at yet but we might be going there. Anti-fascist, a lot of them are… I think… I don’t know. I don’t know how I feel about them because some of them are. They’re very judgmental of common people and working-class people, they claim that they’re there to help the working class, but they don’t understand the working class, but Trump certainly doesn’t understand the working class. I don’t support anything like conservative or this kind of right-wing stuff.

Lockett: yes, I feel a little removed from it, perhaps. I live two lives: at home I’m like the family man, I have kids. You know, there’s always a youth culture, it exists in every city all over the world and it’s like doing cool things, but yeah, of course I still think it exists.

Lockett: well…that’s a good question. There’s definitely over-exposure with Instagram, this information overload, there’s no mystery anymore about anything but it does exist, there’s still some people that’s just like “ah, I don’t use that shit”, it’s out there it’s just not televised.

Javier: yeah, I think so, it’s still there. There’s always smaller bands playing, a lot of college kids, younger kids, so it’s people having a tape label or something, stuff that doesn’t get widespread, they’re doing it ‘cos they love to do it.

Bradford: I think they exist temporarily and are immediately absorbed into the mainstream, because everyone is desperate for both attention and money. So, if anything is new and avant-garde or something it would just become immediately absorbed into the mainstream and then once this happens it’s not bad, it’s no longer vital, you know? As I get older I look more towards old arts, right now I’m obsessed with Rome because the ancient ruins, the history of the Roman empires. Nero is fucking crazy, you know? who was that guy that was like crazy and perverted and he was 14 years old when he was emperor? Eliogabalo. I find it very interesting. Rome, these emperors are terrible and horrible some of them were to the people. They were like the first rock stars. They were rock stars because they were decadent and only interested in pleasure.

Do you believe in God? 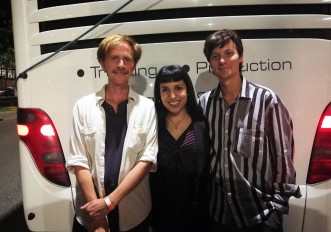